State of local emergency: For disruption information as well as details on how to contact us to report damage visit our Severe weather impact across Auckland page.

The Carlton Gore Road walking and cycling project aims to help make the area safer and more accessible, increasing its desirability as a place in which to live, work and shop.

The addition of cycle lanes on both sides of Carlton Gore Road between Park Road and Davis Crescent will provide an improved connection from the east into the city. It will also serve as an alternative to cycling on the busier Khyber Pass Road.

The addition of a zebra crossing and a raised table across George Street will make it easier and safer for people to get around Carlton Gore Road on foot. 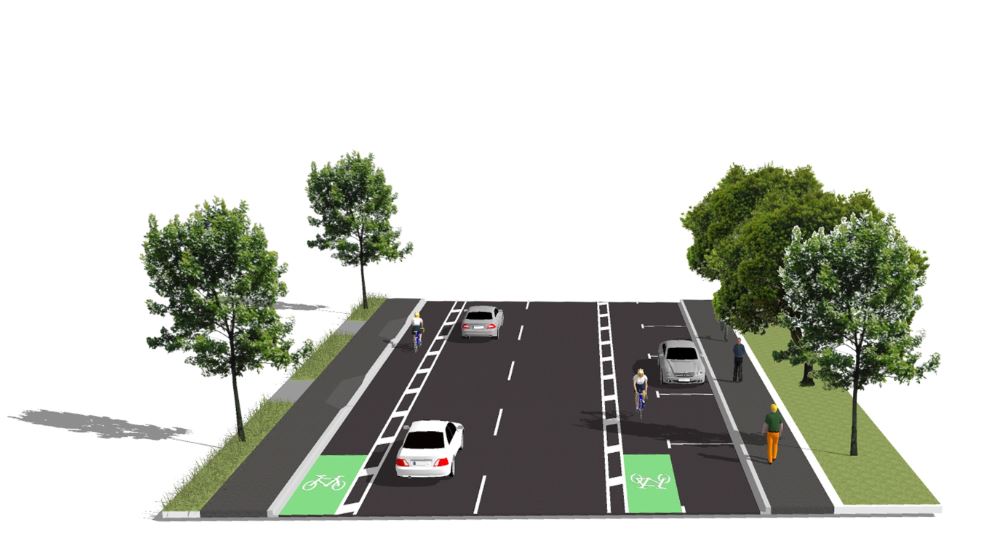 Cycle lanes will be added on both sides of Carlton Gore Road between Park Road and Davis Crescent. A half metre wide painted buffer will provide separation from traffic, with raised kerbs installed between Park Road and George Street for greater protection.
A raised table will be installed across the intersection of George Street where it intersects with Carlton Gore Road, reducing vehicle speeds and making it easier and safer for pedestrians to cross.

A new zebra crossing will be installed near to the George Street intersection and anti-skid coloured surfacing will be added to the approaches of this and the existing zebra crossing near to Morgan Street.
Footpaths between the George Street and Park Road intersections will be replaced and the road resurfaced. The footpath leading into the Domain at the Park Road intersection will become a shared area for people on bikes and on foot. A drinking fountain will provide a spot to pause and refuel.

Parking on the south side of Carlton Gore Road between the George Street and Park Road intersections will change to metered pay and display parking with no time restriction. Within the same section on the Auckland Domain side, parking will be removed to create space for the new cycle lanes. An evening clearway will be introduced to keep traffic moving at peak times.

As a result of construction, noise levels will be higher than normal. We will try and minimise loud or disruptive activities as much as possible.

Community feedback was requested on the Carlton Gore Road walking and cycling project in April 2014.

Your feedback helped shape final design. Changes have were made to the original plans to improve the separation of traffic and cycle lanes, limit the reduction of parking spaces and maintain traffic flow.

For more information about this project