Devonport and Waiheke ferry tickets are changing. Find out more.

Auckland Transport consulted on proposed changes to the speed limits along Scenic Drive from Titirangi Road to West Coast Road.

Consultation closed on 26 April 2015 and a decision on the proposed changes was made in November 2015.

AT has identified Scenic Drive between Titirangi Road and West Coast Road as a high risk rural road within the Auckland region.

Crash data shows that over the past 5 years, there have been 64 crashes reported along Scenic Drive, a large number of those due to speed or loss of control. Of these crashes, 6 resulted in a fatal or serious injury.

The aim of the proposed changes is to set speed limits which reflect the road environment and encourage motorists to drive to the appropriate speed. This has the potential to reduce the frequency and severity of crashes. 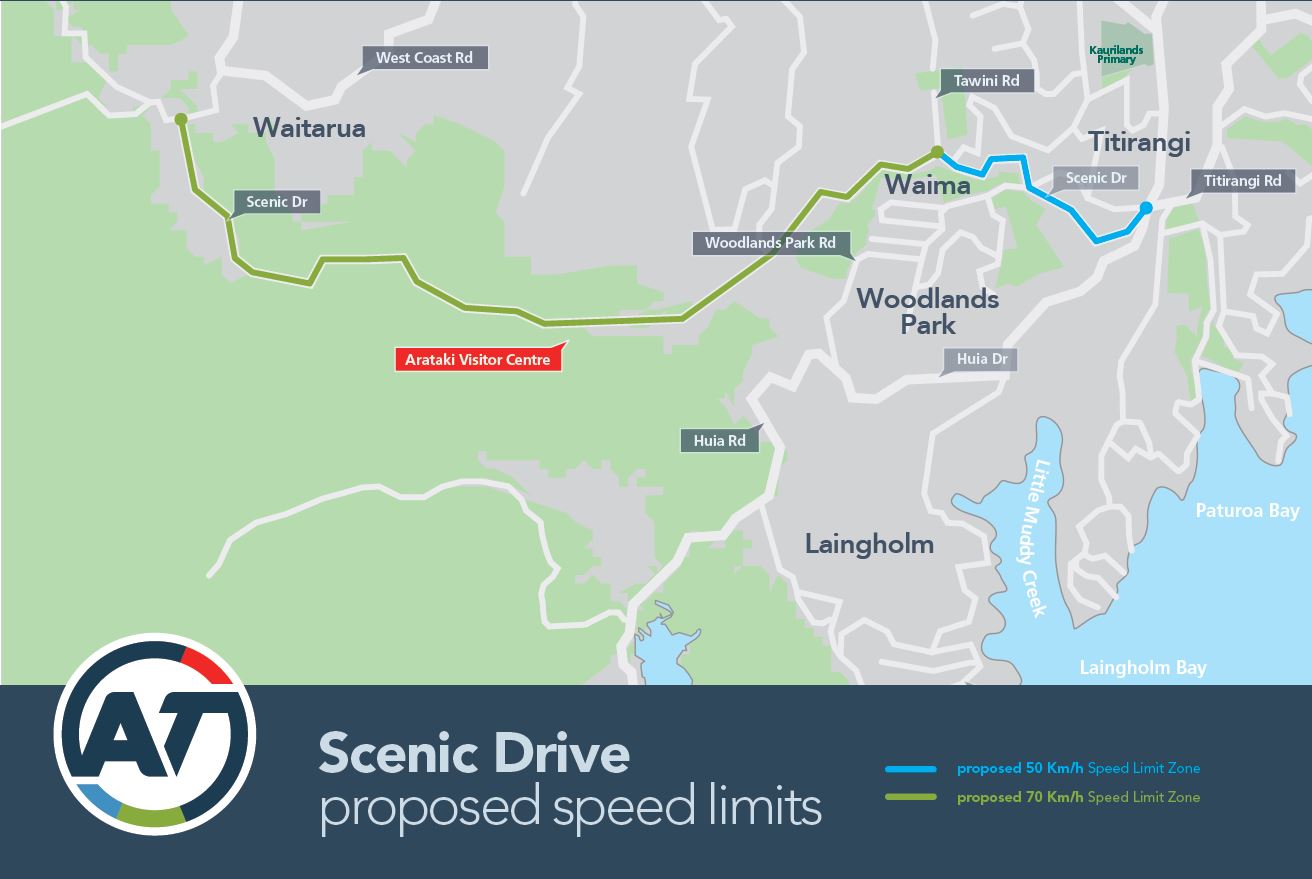 AT will introduce the originally proposed speed changes. In addition, the proposed 50 km/h speed limit will be extended along Woodland Park Road towards Waima Crescent.

The changes to the designated speeds and the new signage will be implemented by 31 January 2016.

AT received over 400 feedback submissions in response to the consultation. Over 90% of which were in support of the proposed speed zone changes.

There are a number of issues raised by the community AT below:

This request was investigated and reviewed by AT together with the NZ Transport Agency and the NZ Police.

Speed surveys were conducted along Scenic Drive which found the average speed of vehicles is already similar to the 50km/h or 70km/h sections we are proposing. Expecting vehicles to slow the extra 20km/h is unrealistic and would result in the speed limit for the entire road being disregarded by motorists as impractical.

The proposed speed limit as listed above remains unchanged at this stage, however AT will continue to monitor the speeds and safety performances on Scenic Drive for the next 24 to 36 months, once the new speed limits are in place.

A number of submissions called for the proposed 50km/h speed limit zone be extended on Woodland Park Road towards Waima Crescent.

AT reviewed this request and agrees that this section of Woodland park Road, due to high pedestrian numbers and vehicle movements, should be reduced to 50km/h. This speed zone will be changed at the same time as Scenic Drive.

Another recurring request was to extend the proposed 50km/h speed limit zone up to Shaw Road.

This request was investigated by AT together with the NZ Transport Agency and the NZ Police.

Speed surveys for this section found that the average vehicle speed was 65-70km/h. Again this is too high for a 50km/h speed limit change to be considered realistic or credible and would likely result in high levels of non-compliance.

The speeds and safety performance of vehicles on Scenic Drive will be monitored for the next 24 to 36 months once the new speed limits are in place.

In addition, AT will undertake further investigation to identify options to improve visibility at the intersection of Shaw Road and Scenic Drive.

Conflict between cyclists and vehicles on Scenic Drive

Concerns were also raised with regard to the number of cyclists on Scenic Drive and the limited area available to safely overtake them.

AT together with the NZ Transport Agency is currently investigating educational signage to encourage all road users to share the road with care and raise awareness of cyclists on Scenic Drive.

In addition AT will be investigating the feasibility of minor shoulder-widening works to improve road width for all road users. Once this investigation has concluded, it will be prioritised along with similar projects in our Minor Improvements Programme based on safety and operational issues. This prioritisation takes place every year after funding allocation to various programmes.

Another common theme in the feedback was regarding the high number of vehicles travelling at speeds inappropriate for the existing road condition. Based on this feedback, we will be undertaking an education and safety campaign to heighten motorists’ awareness of the need to observe speed limits.